Contractors State License Services is committed to the continued growth and education of your career as a licensed contractor. It is our intention to provide you with valuable information of what's new in the construction industry, important events that you may want to attend, and helpful business and exam preparation tips. You can also stay connected with CSLS through Facebook, Twitter, LinkedIn and You Tube. 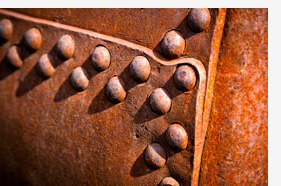 Winter is here, tools will be getting wet, and rust is but a drop away.  Left to its own natural tendencies, iron oxide, the red rust we all know and hate can ruin our tools and appliances and shouldn’t be taken with a grain of salt.

Rust is the result of a simple molecular process between iron, moisture and air. When a drop of water lands on iron, the water molecules mix  with carbon dioxide in the air forming a light acid (think baking soda and vinegar), then picks away at the weaker alloys within the iron. A little molecular restructuring goes on between the elements and the alloy particles are split up. Changes between negative and positive ions result in an iron oxide buildup which, if unheeded, will continue to grow until the layers flake and disintegrate. The pitting you see in a knife blade is a result of the electrochemical reaction of the lifting away of the weaker alloys within the steel.

The rust you see is something you can guard against, the rust you can’t see can be deadly. As rust accumulates, its volume increases. In 1983 the Mianus River Bridge collapsed when an internal bearing was so badly rusted it’s mass literally dislodged a bridge support from its slab.  You see the same type of obvious corrosion build-up on nuts and bolts.

There are many grades of metal on the market which serve various uses and are affected differently by rust. From the bit you buy to the girder you install, the type of metal used should always be an important consideration in any construction project.

The corrosion process for every metal depends on its makeup of alloys. The aluminum oxide buildup on aluminum actually adheres to the aluminum and forms a protective barrier, unlike iron oxide rust which flakes off leaving the metal beneath open to further attack. Copper’s reaction to the elements of water and air causes an oxidation which forms over the copper creating what is called a ‘patina’. This layer of corrosion which sits on the surface, shields the copper below from further deterioration. Stainless steel metals are also available with rust resistant additives, such as chromium and nickel.

With proper attention however, rust can be prevented. Aside from the type of metal used, coatings, and other products on the market can help fight the battle of the rust.  Keeping tools dry and out of the elements however is truly your first line of defense. 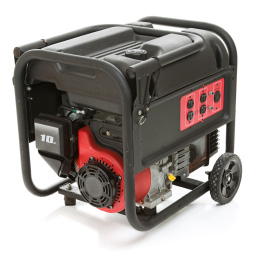 Generators are convenient for temporary electric power but they can also pose hazards. Carbon monoxide poisoning, electric shock and fire are all dangers to take into consideration this winter or anytime you use a generator.

Carbon monoxide is a colorless and odorless gas formed by compounds containing carbon which, because of lack of oxygen, do not burn completely. This is the same exhaust gas from car engines and is extremely poisonous and can be deadly. Every year people die in incidents related to carbon monoxide poisoning, most of them associated with portable generators being used indoors or in partially enclosed spaces. When used in a confined space, generators can produce high levels of CO within minutes. Remember, you cannot see or smell CO, but the danger of carbon monoxide poisoning can still exist even if exhaust fumes are present.

Generators also pose a risk of shock or electrocution especially if operated in wet conditions:

CSLS Honors Creadell Pete Polee III with a Scholarship
Creadell has received a scholarship for a CSLS In-School Law & Trade exam preparation program.  He has been working in the industry for 20 years and now looks forward to getting his General B contractor’s license.  He is currently unemployed and has hopes that getting licensed will open up opportunities so that he can better support his wife and nine children.  Although Creadell is not currently fully employed he keeps himself busy with helping the community,  just this last Thanksgiving he coordinated a group to cook a Thanksgiving feast that he and his family delivered it to the homeless. Good job Creadell! It’s nice to be able to give back to someone so generous.

Displace moisture and discourage rust with proper application of one of the many products on the market such as:

Words of Wisdom
There are so many people out there who will tell you that you can’t. What you have to do is turn around and say “Watch me.”
~ unknown

Referral Program
You can earn up to $50  through our Referral program for each referral you send that purchases one of our courses. Call for details on how to participate.
Call 888-900-2757 for details