Contractors State License Board Warns Licensees to Be Aware of Misleading Business Solicitations
Appeals often look like official government correspondence
SACRAMENTO, CA – The Contractors State License Board (CSLB) wants its licensees to be aware of a warning issued this week by the California State Board of Equalization (BOE).
Licensees are urged to be wary of misleading business solicitations from companies that mimic official correspondence from a government agency.
BOE says businesses have informed the board of notices they have received from the “California Labor Compliance Bureau,” requesting immediate payment of a “processing fee” of $275. The “California Labor Compliance Bureau” is not a government agency. The notices use public information, such as BOE account numbers and industry codes, which give them the appearance of official correspondence.
The “processing fee” is purportedly for labor-related notices that California employers are required to post at their business premises informing employees of their legal rights under the National Labor Relations Act. The notices in question are available free of charge on the National Labor Relations Board’s (NLRB) website.
BOE is not affiliated with the California Labor Compliance Bureau. BOE Correspondence always features the BOE’s title and/or logo and contains contact information. If you receive a notice and question whether it is official BOE correspondence, you should contact your local BOE office or contact the BOE’s Information Call Center at 800-400-7115.
The NLRB can assist licensees with questions regarding required notices at 202-273-0064. 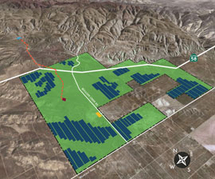 On November 2nd, 2011 SunPower Corporation (San Jose, California, U.S.) announced an agreement with environmental and land use organizations to settle and dismiss a lawsuit against the 250 MW California Valley Solar Ranch (CVSR) solar photovoltaic (PV) project.
Following this announcement, Bechtel Corporation (San Francisco, California, U.S.) reported that it has received Full Notice to Proceed on construction of the CVSR. Bechtel began working on the site in August 2011, and construction is scheduled to last roughly two years.
“Upon completion, the California Valley Solar Ranch will produce clean, renewable energy to meet the power needs of approximately 100,000 homes,” said Bechtel Renewable Power Division President Ian Copeland. “Equally important, it will be built with minimal impact to the land and habitat.”
“We are honored that SunPower Corporation selected Bechtel to deliver this world-class, large-scale solar facility that will advance the renewable energy industry.”

SunPower limits use of site to 50 years
Under the agreement with North County Watch (Templeton, California, U.S.) and Carrizo Commons (San Luis Obispo, California, U.S.), SunPower has agreed to limit the use of the site to 50 years, and to decommission the plant and restore habitat at the site within that time frame.
The company has also agreed to provide for enhanced communication and collaboration regarding mitigation and monitoring activities during the construction of the project, as well as funding of research for endangered species.
SunPower had previously committed to preserve more than 36 square kilometers of grasslands in the area.