SACRAMENTO – The Contractors State License Board (CSLB) wants consumers in smaller communities and rural areas of the state to know that they’re especially vulnerable to becoming victimized by unlicensed contractors. Last week CSLB’s Statewide Investigative Fraud Team (SWIFT) investigators teamed with the Kern County Sheriffs and District Attorney Offices, and the Department of Homeland Security’s Immigration and Customs Enforcement to conduct a sting in the city of Ridgecrest.

The operation, conducted on February 3, 2011, led to the arrest of eight suspected unlicensed operators.  CSLB investigators posed as homeowners and invited suspected phony contractors to a newly constructed home near Pearson Park.  Investigators asked for bids that included landscaping, fencing, and painting.  If the bid totaled more than $500 in labor and materials and the suspect was not state-licensed, they were arrested.  Eight were given a Notice to Appear (NTA) in court to face misdemeanor charges of contracting without a license; some also face charges of illegal advertising, and soliciting an excessive down payment, also misdemeanors.  All eight will face a charge of failing to secure workers’ compensation insurance for employees.  They are scheduled to appear in Kern County Superior Court in Ridgecrest on March 29, 2011.

“This sting is a perfect example of why homeowners need to make sure the contractor they hire is properly licensed and insured.  It only takes a minute to check information on the CSLB website at www.cslb.ca.gov or www.CheckTheLicenseFirst.com,” said CSLB Registrar Steve Sands.  “If someone working on your property is injured and is not covered by workers’ compensation insurance, they could turn around and sue you for their medical bills.”

By law, anyone performing home improvement services that total more than $500 in material and labor must be licensed by the state of California.  Contractors must include their CSLB license number in all advertisements and contracts.  Those who are not licensed can only perform jobs valued at $500 or less.  Their ad must state that they are not licensed.

CSLB received critical support for this operation from one of its legitimate licensed contractors. Four of the eight arrested during last week’s sting operation were the result of leads from that licensee.

Licensees face the difficult task of competing against those who break the law by operating in the multi-billion dollar underground economy.  In addition, the loss of tax revenue takes money away from schools and law enforcement.

“Homeowners should also know that they have little recourse against an unlicensed operator if something goes wrong with a project,” added Sands.  “That’s especially true if you give them a big down payment and they never show up to start the job.”  CSLB offers a variety of free services, including mediation and arbitration, for consumers who have a problem with their licensed contractor. 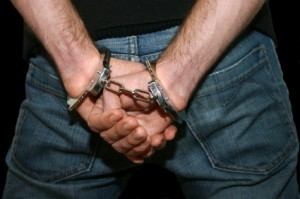 During the sting operation at a Glendora home, SWIFT investigators posed as homeowners seeking bids for painting, fencing, flooring, and cabinetry projects. Suspects who bid more than $500 for labor and materials received a notice to appear (NTA) in court. “Homeowners need to be fully aware of who they are letting into their homes,” said CSLB Registrar Steve Sands. “This operation illustrates the importance of spending a couple of minutes on CSLB website to check the license before you hire a contractor to ensure you arenâ€™t putting your family or your home at risk.”
California law requires all home improvement jobs valued at more than $500 to be undertaken by a licensed contractor. Contractors also must place their state license number in all advertisements. Unlicensed individuals may advertise and accept jobs valued at less than $500, but their ads must state that they are not a licensed contractor. State law prohibits solicitation of a down payment that is greater than 10 percent of the projects value or $1,000, whichever is less, for home improvement contracts. There is an exception for about two dozen licensed contractors who purchase special consumer protection bonds and are noted on CSLB’s website. State law also requires those selling home improvement services for licensed contractors to register with CSLB.
Since 2005, state law has required criminal background checks for anyone applying for a new license or adding a license classification. California law also requires contractors to have workers compensation coverage for all of their employees to protect homeowners from liability.