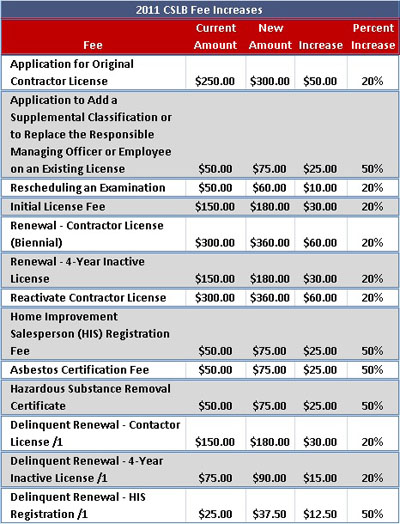 We knew that this was coming and now it’s official. CSLB is scheduled to increase licensing fees begining July 1, 2011. If you’re thinking about getting your license or making changes to your license now is the time to do it.
Changes to existing regulations that would increase contractor licensing fees received final approval from the Office of Administrative Law, effective December 18, 2010. Fee increases begin on July 1, 2011 for those applying for or changing their contractor license. Renewal fees for contractor licenses that expire on or after July 1, 2011, will also be increased. CSLB fees have remained at their current level since 1993, and the additional revenue will assure CSLB upholds its mandated protection of California consumers and the integrity of the construction industry.